B. Keys - Assistance to bring family from New South Wales.

C.E. May Field Book No. 12 - Upper Gascoyne traverses and connections

Part of FILES - DEPARTMENT OF ABORIGINES AND FISHERIES

Part of FILES - DEPARTMENT OF ABORIGINES AND FISHERIES

Mychajlo Mulawa, Ukrainian nationality, on 26/10/1917 was arrested and charged with the wilful murder of his wife Daria Mulawa.

Child endowment - request for instruction regarding Police supervising the expenditure of moneys from on behalf of the natives.

The file contains various documents about specific endowment cases in Mount Barker, Quairading and a few other area and also covers requests for country Police to supervise payment of Child Endowment to natives and refusals to do so.

Photocopies of articles in The West Australian newspaper of April and May 1922 (when an appeal was underway for subscriptions to purchase the Mill for restoration and preservation) and some documentation concerning disputed claims as to who built ... 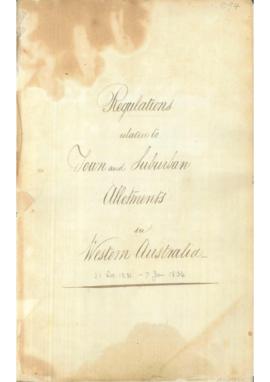