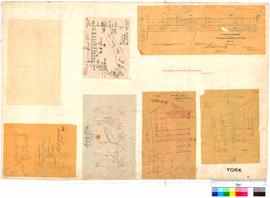 Original sketch of part of the Avon River [York] by James Drummond, March 1830

Letter from W.H. Mackie to Col. Sec. P Brown describing incident of 3 May between a group of Aborigines and white settlers. The military under Capt. Irwin was involved, Ensign Dale was wounded, severa

Lt. A. Erskine - journal of expedition from Perth over the Darling Range.

Abstracts of letters received by the Surveyor General from Government Residents. Details include letter no., date, from whom, date received and subject of letter.

Letterbook: letters 1056-1734 [As well as the letters, the volume contains both an alphabetical index and register. The volume includes three pages of accounts between the index and the register.]

List of vessels which had arrived in the colony up to September 1830, prepared by Daniel Scott, Deputy Harbour Master. Gives name of ship, tonnage, cargo, stock, passengers (total number of men, women

This series contains copies of letters to government residents relating to land in the Resident's district. There is an index at the back of vol 47. Abstracts can be seen at WAS 1847.

Brief abstracts of letters sent to government residents. Copies of these letters can be seen at WAS 1846.

Part of ABSTRACTS - CORRESPONDENCE - BOARD OF COUNSEL AND AUDIT

This series consists of volumes recording queries regarding land holdings and deals submitted by settlers, together with comments, reports and answers made by the Department.An Index to the Queries can be seen at WAS 1836.

Letters received from surveyors, assistant and contract surveyors. Filed aplhabetically by surveyor's name. The series includes letters, reports and diaries. Reference is found by checking in the Lands Index on microfiche.